This seat was made from a rusty metal bed frame. The end legs of the bed were turned upside down to make arm rests. The remaining metal was welded to the front and became front legs.  The cover was made from many pieces of found fishing rope weaved into a mesh to make a comfy chair cushion. Discarded fishing rope and nets lost or dumped out at sea continue to kill and injure seals, turtles, dolphins, whales birds and fish. The importance of reporting and recovering lost fishing gear is crucial to preventing ghost fishing. Lost nets go on to kill and damage the sea bed which adds to the problem of over fishing and the loss of bi-catch of species which help to sustain our ecosystem. 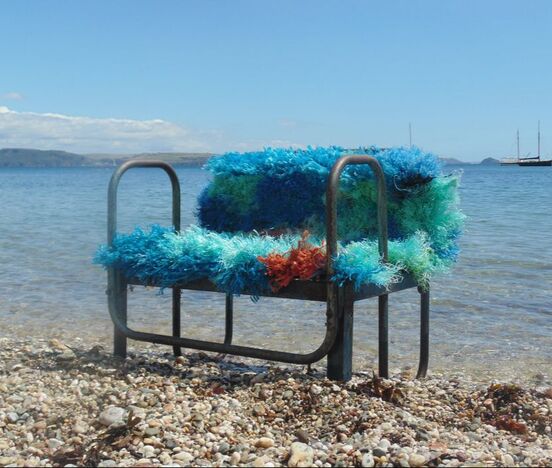 I chose to use the John Dory as an image for raising awareness as it has such beautiful markings, and it looks so sad with it's down turned mouth.  I have emphasized the darkness of the spot using the smoothest, blackest pre-production pellets, otherwise know as 'nurdles', to convey a sense of absence, given the increasing loss of fish from our oceans. The John Dory, in all it's detail, was created using  approximately 64,000 nurdles and bio beads, (mermaid's tears). These tiny pellets are often used in sewage treatment works to help to purify water but have have escaped into our rivers and ended up floating out to sea. The nurdles used in this picture were  collected from Whitsand Bay, South East Cornwall. They are particularly dangerous to fish as they are mistaken for fish eggs, which are the base of their diet. When ingested they cause intestinal blockage and the chemicals and heavy metals contained within them can contaminate their body tissues during the digestive process. These carcinogens are bio-magnified up the food chain to mammals such as seals and dolphins. We eat fish too so ultimately our food could be contaminated. 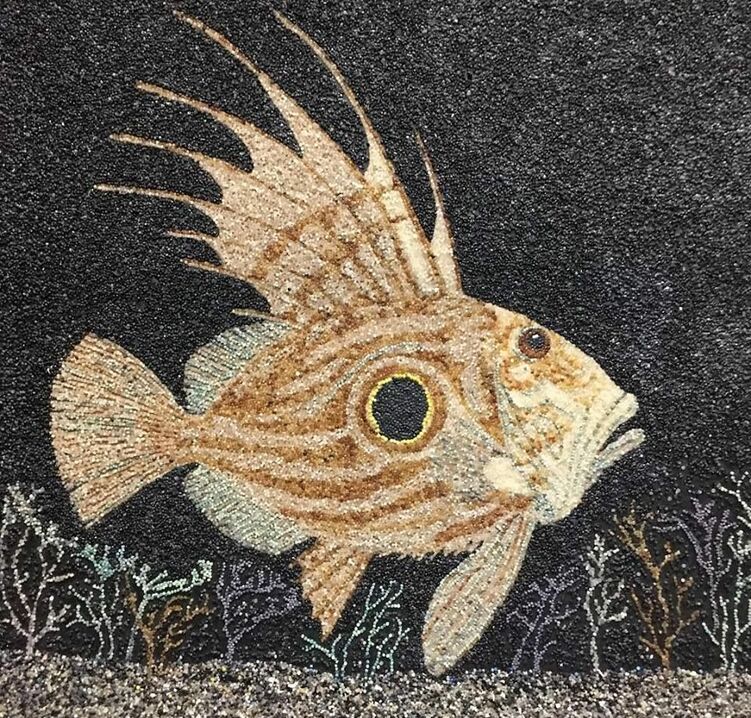 The St Piran's crab grows up to 3 cm long so I decided to make this sculpture, measuring 1 metre across, to get this remarkable little creature noticed. The Clibanarius erythropus is a type of hermit crab, that disappeared from the coast of Cornwall for almost 50 years following the Torrey Canyon oil spill of 1967.  It was given the title 'St Piran's Crab' during a Spring Watch competition in 2016.
St Piran is the patron saint of Cornwall. Like the legend of St Piran, we like to think of this little creature as a symbol of hope, that nature is resilient and given chances can recover from man made pollution. The shell base is made from a huge piece of beached polystyrene that measures 1 metre across. and is decorated with small sea worn polystyrene pieces. The extraordinary black and white spotty eyes of this adorable little creature has been replicated using black and white nurdles. Polystyrene is one of the worst and most widespread pollutants of the marine environment, it is very attractive to wildlife that mistake it as food.
​
The Phoenix - a symbol of enlightenment, reborn with strength and wisdom
Commissioned by Y.CO yacht company.
Like a phoenix emerging from the ashes, this sculpture expresses the resilience of nature; given chances nature can recover. Humans need to stop taking, and starting giving back to help the marine environment regenerate.
The representation of wings, water, egg, and light from within symbolizes humans need to help nature to flourish. The materials used to make this sculpture are polystyrene, wire, ocean plastic fragments and plastic pellets all collected from local beaches. 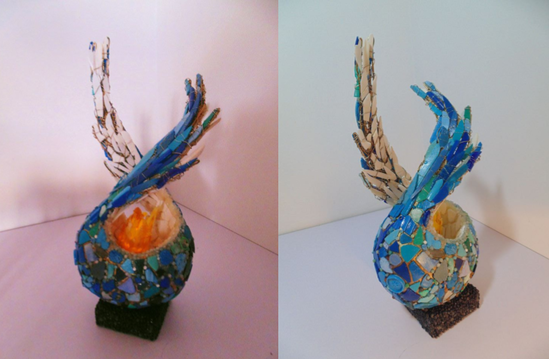 I found this circle of compartments (I don't know what it is) on Tregantle beach. It has been very useful for displaying some of our more interesting beach finds. I find beach-combing and learning about the history of things we find fascinating. It is a hobby that is free, helps the environment, and rewards you with artistic inspiration and treasures. 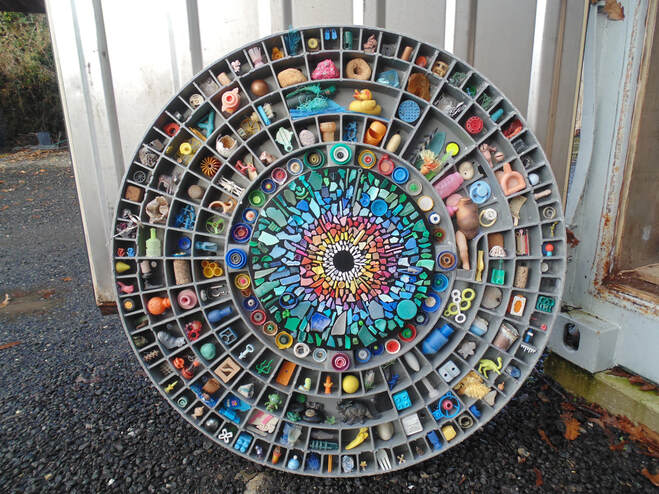 I spray painted Basking shark on the side of the 5 x 2 m container where equipment and our collections of ocean plastic are stored. 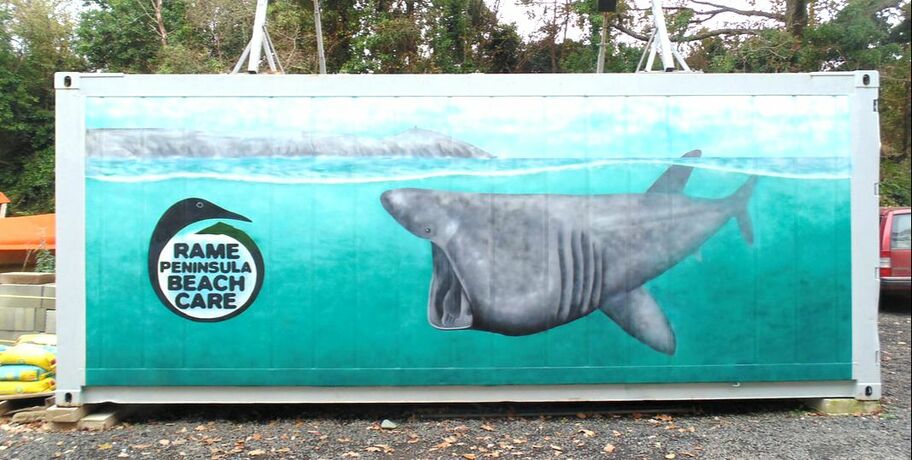